LISTEN UP: BRRRAT! YOU SHOT ME IN THE HEAD. 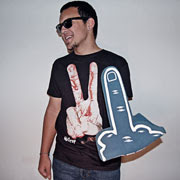 Location: Miami, FL
Websites: MySpace & Soniccmusic.com
Bio: This house music-making big-timer went from unknown 17 year-old, to music producer in only a few months. He has remixed tracks from heavy-hitters such as: Deadmau5, Laidback Luke, and Kaskade. Hailing from the M.I.A, SonicC drew support from many electronic DJs with the release of “Stickin,” in 2009. Since then, SonicC has produced tracks and remixes on Nervous Records, Ministry Of Sound, Mixmash, Fools Gold, and Mute Records. Currently he is working on his debut full-length album for Dim Mak Records.


Armand Van Helden and Steve Aoki need no introduction, as their stamp on dance music is already firmly pressed onto dancefloors and into headphones. Their communal joint, "Brrrat!" is rapid fireworks with a cut of that classic rap exclamation, "brrrat." But from an EP of remixes comes Dim Mak young gun SonicC's rub on it and it sure suits his name—warbled and warp speed, slowing the "brrrat" sample at points to a water dribble. 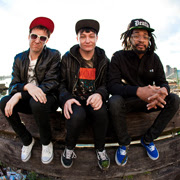 THE DEATH SET
Location: Gold Coast-Sydney-Brooklyn-Baltimore
Website: thedeathset.com
Bio: Spazzy lo-fi cross genre punk. Since mid 2005 we have played hundreds of shows mostly in Northern America but also in Canada, Australia, England, Wales, Germany, The Netherlands, France, Czech Republic and Austria. With artists such as: Spankrock, Ex Models, Matt and Kim, Bonde Do Role, Drop the Lime, Girl Talk, Wolfmother, The Presets, Dirty Projectors, Ninja Sonik, Shoplifting, Ghilain Poirier, PRE, Ecstatic Sunshine, Mika Miko, Meat Puppets, and many others...
Short and not-so-sweet "Yo David Chase, You P.O.V. Shot Me In The Head"—The Death Set's collab with Diplo and XXXChange—might be a little bit dated, lyrically. Is this possibly a jab at the mysterious series finale of The Sopranos? If you weren't into the show, there's enough sonic satisfaction to behold, as these are all perfectionists of bombast, that non-James Gandolfini champions can get down with.
Email ThisBlogThis!Share to TwitterShare to FacebookShare to Pinterest